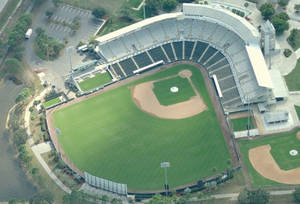 It is no surprise that Florida is a key state for spring training for major league baseball camps. The weather is usually perfect and can give athletes a good edge on their upcoming season. It is noted that a good climate is an important facilitator to allow athletes to work out their cob webs from the winter break.
Lee County has long been known as a perfect climate for baseball spring training both in temperature and economic support. In addition, the region is more than a bit friendly and supportive of their spring training teams with a solid fan base. These are very important factors when considering what works best for spring training facilities for national baseball teams.

To Lee County Florida, baseball is about as intrinsic in their blood as Casino’s are in Las Vegas. Home to both the spring training camps of the Boston Red Sox and the Minnesota Twins, the area is a prime example of how nurturing major league teams can be a financial boon for a local economy.

Certainly for the most part, one can say that Lee County officials are highly supportive of their major league teams. The Boston Red Sox recently started training in their new $80 million dollar spring training park with the help and support of the Lee County officials and the public taxpayers. The County has given much in subsidies to the many needed improvements, upgrades, renovations and new stadium needs of these two teams.

Part of this is because the area gets a much vital economic boost each year from these two teams. Overall, there is estimated revenue created of about $75 million per year to the local economy from the spring training of these two professional teams. As an additional potential boon for the economy, there is also talk of the Nationals coming to the area and taking over the old Red Sox stadium which they vacated in 2011 for their new stadium. The Nationals have considered relocating to this facility for their spring training if the funding can be allocated to renovate and upgrade the vacated Red Sox training stadium.

The New Red Sox JetBlue Stadium has many perks and offers players and visitors a great venue to enjoy spring training at its best. The older Twins stadium however, is in need of upgrades that are expected to cost approximately $35 million dollars, and is slated to begin within the next few years. These improvements are critical to keep both the Minnesota Twins and their fans from moving to a better facility. The Twins training stadium is 22 years old and is in need of upgrades and renovations just to keep it up to par for a national league camp. There is much anticipation that some state and federal grants could make up some of this needed funding. However, local officials know the County would need to put up additional capital as well to support such a move. Negotiations are still ongoing with hope that the Nationals will be a welcome addition and future MLB team to join the ranks of Lee County’s best residents.
Posted in Southwest Florida
no comments yet
Please enable Javascript to comment on this blog
Like or Share
Loading likes...